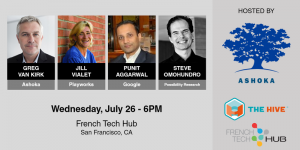 Mark Zuckerberg recently acknowledged that Facebook has “a responsibility to do more, not just to connect the world but to bring the world closer together.”

This strategic move comes at a critical point in time, where exponential technological progress begins to raise pressing questions about the future of our collective wellbeing.

In a world defined by relationships and connectivity, have we undervalued empathy as a key skill and currency?

Should empathy be a metric for grounding our technological progress in fairness and humanity?

Join a provocative discussion with social entrepreneurs and technology thought leaders who are asking these very questions and are already taking steps to re-calibrate major systems (like education) with empathy at the center.

Greg is the Co-Founder of Community Empowerment Solutions and Social Entrepreneur Corps. He is an Ashoka Lemelson Fellow, Ashoka Globalizer and was recently recognized as Schwab Foundation “Social Entrepreneur of the Year for 2012 (Latin America)” at the World Economic Forum. Greg is the innovator who designed the MicroConsignment Model. He has served as a consultant for organizations such as USAID, Chemonics, VisionSpring, Soros Foundation, Church World Service, Inter-American Development Bank, IFC, Water For People and Fundacion Paraguaya in the US, Latin America and Africa. Greg also contributes time as “Social Entrepreneur in Residence” and has recently worked with Columbia University, NYU, Marquette University, Indiana University, University of San Diego and Arizona State University. He is a senior advisor for AshokaU. He has taught social entrepreneurship at Columbia University and NYU Wagner. Greg began working in rural small business development as a Guatemala Peace Corps volunteer in 2001. He worked in investment banking for five years before arriving in Guatemala. Two deals he led at UBS during this time won “Deal of the Year” honors from Structured Finance International magazine.

CEO and Founder Jill Vialet has worked for more than 30 years in the nonprofit sector. In 1996, Vialet launched Playworks with two schools in Berkeley, California. Currently, the organization brings play and physical activities to children across the country, with offices in 23 cities. With a staff of 700, this year Playworks will reach 900,000 students through on-site coaches, professional training, and consultative partnership, serving 1,800 schools and youth-serving organizations. Prior to Playworks, Vialet founded the Museum of Children’s Art(MOCHA) in Oakland, California. She served as the executive director at MOCHA for nine years, ultimately expanding its programs to reach 20,000 young people each year.

Vialet graduated from Harvard University where she studied medical sociology, played rugby, and became actively involved with Harvard’s service-learning community. Vialet was a Eureka Fellow from 2000 to 2001 and in 2004 she was selected as an Ashoka Fellow. In 2009, Vialet and Playworks were selected as a member of the Clinton Global Initiative. In 2011, Jill was named by Forbes magazine as one of the top 30 leading social entrepreneurs and recognized by the Women’s Sports Foundation as one of 40 Women Leaders in honor of the anniversary of Title IX. In 2013, Jill was awarded the James Irvine Leadership Award and in 2014, Jill received the Pahara Aspen Education Fellowship.

In addition to his role at Google, Punit is also an Advisor at the Founder Bay organization which provides a suite of leadership development services designed to encourage and challenge leaders to achieve their true potential, live their best lives and have maximum impact in the world.

Earlier in his career, Punit was an Executive Search Consultant in the Silicon Valley and Los Angeles offices of Korn Ferry, where he conducted senior-level assignments, including many C-suite roles, within the Global Technology and Media & Entertainment practices.

Prior to Korn Ferry, Punit was a Management Consultant with Deloitte Consulting, where he focused on strategy and operations across a wide array of industries. He also worked at a Silicon Valley start-up and in the United Kingdom for a leading mobile services provider overseeing a brand portfolio with P&L responsibility. Punit has spoken at Stanford University, Berkeley University and private audiences.

Steve has been a scientist, professor, author, software architect, and entrepreneur doing research that explores the interface between mind and matter. He has degrees in Physics and Mathematics from Stanford and a Ph.D. in Physics from U.C. Berkeley. He was a computer science professor at the University of Illinois at Champaign-Urbana and cofounded the Center for Complex Systems Research. He published the book “Geometric Perturbation Theory in Physics”, designed the programming languages StarLisp and Sather, wrote the 3D graphics system for Mathematica, invented many new learning algorithms (including manifold learning, model merging, bumptrees, and family discovery), and built systems which learn to read lips, control robots, and induce grammars. He is president of Possibility Research and Self-Aware Systems, a think tank working to ensure that intelligent technologies have a positive impact. His work on positive intelligent technologies was featured in James Barrat’s book “Our Final Invention” and has generated international interest. He serves on the advisory boards of the Cryptocurrency Research Group, the Institute for Blockchain Studies, Dfinity Cryptocurrency, and the AI startup Cognitalk. Steve is an award-winning teacher and has given hundreds of talks around the world. Some of his talks and scientific papers are available here. He holds the vision that new technologies can help humanity create a more compassionate, peaceful, and life-serving world.

Over the last 35 years, Ashoka has pioneered the field of social entrepreneurship with the goal of creating a an “everyone a changemaker world.” Ashoka supports a network of more than 3,000 Ashoka Fellows who are implementing system changing solutions to human and environmental problems. By creating fundamental changes in the experiences of children and young people, Ashoka allows them to view the world differently and see their full potential as a changemaker.

The Hive (www.hivedata.com) is a venture fund & co-creation studio based in Palo Alto, CA to co-create startups focused on AI powered applications in the enterprise. The Hive works actively with founders to help them create, fund and launch data-driven startups. The Hive model is a high touch model, that applies its entrepreneurial and operational experience to accelerate company building. The Hive team consists of successful company-builders, serial entrepreneurs and investors who have created market-leading companies with several billion dollars in exits.

The Hive Think Tank is a thought leadership forum consisting of a community of data experts with over 9500 ‘databees’. It brings together the community of entrepreneurs, business and technology practitioners focused on the use of AI approaches. Every other week, from 150 to 800 of these individuals meet to participate in The Hive’s thought leadership events that include talks, panel discussions and dinner discussions. They highlight the trends and best practices of AI and Big Data focusing on four key areas: Applications, Data Infrastructure, Data Science, and Entrepreneurship. Past events of The Hive have featured Steve Wozniak (founder of Apple), Edward Tufte (father of Visualization, Professor emeritus of Yale), Doug Cutting (father of Hadoop), Jonathan Reichental (CIO of Palo Alto), Deepak Chopra and Mike Milken.